Thirst: Marriage as Poison and Cure 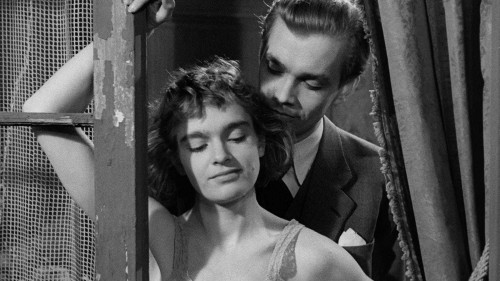 With Thirst (1949), Ingmar Bergman, a visionary master of cinema, made his first contribution to the exploration of marriage — a topic he would return to most memorably in Scenes from a Marriage (1974). It is often argued that Thirst’s imbalanced and loosely connected storylines and intermittent flashbacks muddle the overall effect of the film, but the individual scenes stand as brilliant musings on relationships between men and women. Pieced together from a collection of short stories, the disconnectedness of the narrative can be excused. As an early example of classic Bergman themes and aesthetics, Thirst is an interesting piece to analyze due to its raw examination of the nature of men and women as two emotionally distinct species.

The film’s opening shot is of a river abundantly flowing and swirling away from us. Raoul (Bengt Eklund) walks out of the water, followed by his lover Rut (Eva Henning) struggling to stand up. Raoul goes back to help her — the first of several man-rescues-woman moments in the film. Their romantic outing continues with Rut’s discovery of Raoul’s marriage. Raoul wisely points out, “a man my age who isn’t married with kids is a failure, but it’s nothing we can’t work out.” This opening sets the stage for a series of dialogues exploring men and women’s place in relationships. Thirst often portrays men as arrogantly dominant and women capable of seeing the absurd truth of how they’re treated but instead of asserting themselves are driven to hysteria.

After suffering an abortion that leaves her infertile, Rut feels embittered by her painful relationship with Raoul. She marries Bertil (Birger Malmsten) and swiftly develops a thirst for alcohol and insistence on stirring up trouble. Most of the film focuses on Rut and Bertil’s train journey across war-torn, poverty-stricken Europe (an apt backdrop to a tumultuous marriage) and her constant attacks on her husband.

As Rut’s nervous breakdown ebbs and flows, Bertil recounts the story of Arethusa. Arethusa turns into a freshwater spring after fleeing from the river god Alpheus and the lustful Alpheus pursues her despite the impossible union of their waters. Bertil concludes “Two sexes can never be united, separated by a sea of tears and misunderstandings.” Rut and Bertil’s marriage is a prime example of the impossible union of the two sexes. In Bergman’s imagery their waters never mingle. Rut is a jittery, cocky, provocative, depressive woman circling Bertil like a shark and Bertil, though steady and numb, dances around her fluctuations, unsure as to whether he should submit or dominate, embrace or leave, love or hate.

In another storyline, Viola (Birgit Tengroth), a recent widow, Bertil’s ex-lover and Rut’s old friend from ballet school, battles with depression in her psychiatrist’s office. The long dialogue between Viola and her psychiatrist Dr. Rosengren (Hasse Ekman) is a terribly on the nose but nevertheless incredibly revealing battle between the sexes. Rosengren denies Viola’s grief over her deceased husband and demands that she fall in love with him despite being married himself. He asserts, “Come away and break up a marriage. Do something worthwhile. Help yet another sleepwalking couple wake up from their illusions.” He also accuses Viola of never having loved her husband and sugarcoating her marriage now that it’s over.

In this unusual doctor-patient exchange Bergman suggests perhaps that a happy marriage is an illusion women cling to because they have a tendency to want things to survive rather than to perish. He also philosophizes on marriage as an institution based on an idealistic and unattainable union. This view may have some merit, but what’s interesting is his portrayal of Rosengren, which he uses to demonstrate the absurdity of men’s assumptions of what women need and how men can heal and rescue them. Unashamedly Rosengren expresses his own childish demands by attempting to persuade Viola of her presumed lacking: “Just be normal, don’t hold back… You need someone. Otherwise you’ll perish. Cry to me… Let go of your own self. Give yourself to me and I’ll deliver you.”

Increasingly comic in his desperation Rosengren continues, “I’ll carve out your real self. I’ll plow your virgin soil… I’m God’s representative on Earth.” Viola’s retort is equally hilarious: “You will not plow my soil!… You shouldn’t be treating people! I won’t be coming back. I’ve discovered I’m well.” Hopeless now, Rosengren delivers the final verdict on Viola: she will no doubt find herself in an asylum, as she is incurable. As heavy as this dialogue is and as much as it violates the rule of “show, not tell,” its over-the-top quality is what makes it work so well. Through dialogue, Bergman speaks to the tragic truth of how men viewed, and might still view, women and how it only makes sense that women were (and, perhaps, still often are) perceived to be destined for nervous breakdowns, depression, or at the very least loneliness.

Thirst’s exploration of loneliness is best personified in the character of Valborg (Mimi Nelson), who after suffering through relationships with men has become a lesbian and hopes to make a romantic connection with Viola, who rejects her coldly. Valborg is not only a loner as a woman surviving in a man’s world, but she’s also alienated as a lesbian. Her refusal to be associated with men is experienced as a solution to a problem, but it brings another layer of pain, a closing of doors in the search for love and comfort.

In his tri-layered tale of lonely women, Bergman presents a widowed woman, tormented and ridiculed; a gay woman, destined for misunderstanding and loneliness; and a married but unhappy woman, infertile, alcoholic, furious, unloved. In a harrowing scene Bertil knocks down Rut with a bottle, fulfilling Rut’s earlier prophetic judgment of men: “There isn’t a man who hasn’t brought ruin to a woman, one way or another.” A quiet relief comes to Bertil and the audience alike, until a new day begins and with regrets and longing they embrace. They are each other’s poison, but as aptly stated in the film, “hell in marriage is better than hell alone.” After what we have seen in Thirst, I predict it would be hard to agree with this statement, but for the famously melodramatic Bergman, a bad marriage still trumps loneliness.

— This article was published in Brattle Theatre Film Notes on October 3, 2018