Swept Away: Lina Wertmüller’s Maze of Sex and Politics 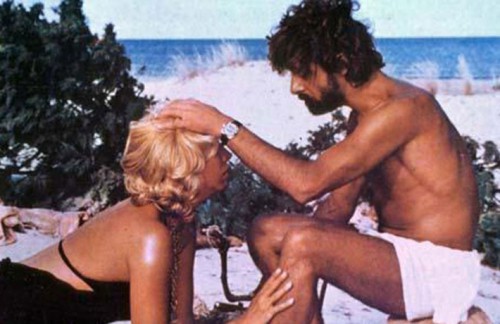 Italian filmmaker Lina Wertmüller’s Swept Away is at once outrageous, weird and guiltily seductive. As the poster suggests we’re in for passionate love and sex on a beach. The affair’s unlikely pair of counterparts are a rich socialite, Raffaella (Mariangela Melato), and a communist deckhand, Gennarino (Giancarlo Giannini). The pointedly ironic mismatch, namely the rich girl vs. poor boy tale, seems at first to be the basic premise of the film. But soon enough, Wertmüller’s unapologetic boldness in handling her material makes the film truly stand out. The film has four distinguishable chapters that differ drastically in tone and content, and provide evidence of Wertmüller’s unique storytelling technique.

Wertmüller paints this simple tale with a raw, flawed, hard-to-pin-down approach. The 45-minute introduction sets up the political opinions of the two leads in a cumbersome, simplistic, repetitive series of scenes. We are asked to sympathize with the benign and comic Gennarino and share his resentment toward the rich yacht guests, the outspoken and spoilt Raffaella in particular. This comedy sketch-like opening paints a black-and-white picture of politics. The rich and the poor are stripped out of context and reduced to parroting very basic views of what it means to be rich and what it means to be poor. The rich are tyrannical, self-indulgent and rude; the poor are powerless, envious and resentful. While the film could do with more complexity and depth in its portrayal of political views by adding more context and backstory for the two leads, its lack of dimension brings a naivety and cartoonishness that lighten the mood and increase the power of the brutishness that is to follow.

After finding themselves shipwrecked, the primitive island life sucks them in; the power roles are reversed. With money taken out of the equation, the poor communist Gennarino suddenly has the upper hand. The social structures built around the class struggle are at once laid bare and ridiculed. Gennarino is savvier at hunting for food, building a fire and finding shelter and uses his capability as currency against Raffaella. He mercilessly exercises the privileges of his newfound status in his instant kingdom. Raffaella’s obeisance is not enough; she has to serve him and submit to his supremacy if she wants to survive. Primitive life apparently calls for primitive relationships. Money is replaced by survival skills; the fascism of the rich gives way to the fascism of the capable. Wertmüller suggests, in no uncertain terms, that even the poor will turn tyrannical when he holds the power; it is human nature.

If the opening chapter on the yacht gave us a watered-down version of fascism, the second chapter on the island reveals the fascism that resides in all of us. The third chapter turns our attention to the sexual tension between the castaways, and it is sex that finally brings complexity to Swept Away, filling its dull politics with conflict, giving them stakes and sophistication. The face of fascism once again changes: it leaps from fascism of the powerful to fascism of the male, and both kinds apparently look the same.

In the third chapter of Swept Away, Gennarino takes one step further in his insatiable desire to overpower Raffaella. In a near-rape scene, he attempts to conquer her body, but the catch is that he wants her to beg before he’s willing to bestow her the honor. Here things get increasingly murky. When Raffaella was the one in power, Gennarino loathed her and revolted against his position, but when the power equilibrium shifts and she is demeaned and forced to beg, she begins to enjoy it.

Primitive conditions first showed us that nature strips us of our class and enforces equality and cooperation upon our relationships. But now, Wertmüller dares to imply that once the woman loses her artificial power (one that comes with money and social status), she would surely come to appreciate and even crave her subordinate position. That her nature is, in fact, submitting to male power and brutality. Raffaella eventually chooses her privileged old life over a life with Gennarino on the island, but it is with great sadness and regret, as if she’s going against her true nature to fit back into her social role as a socialite.

The sadomasochistic relationship that develops between Gennarino and Raffaella is loaded with potential subversive readings. But if we take this couple as an individual entity, and not as male and female archetypes, then we can ease into accepting the strange possibility of Gennarino’s preposterous demands and Raffaella’s exaggerated willingness to become Gennarino’s slave. Just as the passionately intertwined mass of limbs we grow accustomed to watching, we also learn to see sexiness in the aggression and beauty in the haphazardness.

The last chapter of the film has a melodramatic tone that has an altogether different vibe than the rest. Civilization sweeps Raffaella off her feet despite her resistance. Gennarino and Raffaella know deep down that she would fail in her devotion to Gennarino once they’re back to the realities of a capitalist society. But, Gennarino takes yet another unexpected step and tries to win back Raffaella’s heart by buying her a diamond ring – the ultimate capitalist gesture. Unsurprisingly, it doesn’t work. Raffaella is too caught up in her life to return to Gennarino, but she has also learned that love cannot be bought.

At its core, Swept Away is a film about simple dualities of rich vs. poor, man vs. woman, communist vs. capitalist. It starts out with a basic premise and takes us through the murky waters of desire, power, ego and love. If only for the nonchalant outrageousness of Wertmüller’s cinema, Swept Away is worth a look from today’s increasingly complicated perspective on feminism and politics.

— This article was originally published in Brattle Theatre Film Notes on June 2, 2017