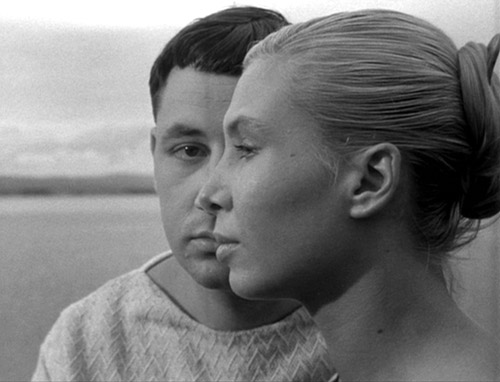 Influential French filmmaker Agnes Varda’s debut film La Pointe Courte (1956) is a great reminder to modern cinephiles what film-viewing experience can be. Following the footsteps of Italian Neorealism and in the wake of the French New Wave, La Pointe Courte serves as an amalgam of the kind of films that transformed our understanding and appreciation of film language and aesthetics. It not only represents a major step in cinema history, but is also a refreshing viewing experience for the modern moviegoer who is accustomed to conventional plot and character development and an easily discernable protagonist.

La Pointe Courte differs from most mainstream films in a few ways. First, it has two storylines that don’t connect by a cause-and-effect relationship. One storyline witnesses local fishermen’s struggle against the government inspectors who threaten their livelihood by placing restrictions on their fishing zones. The string of impersonal documentary-like scenes of fishing, sharing mishaps with inspectors and ordinary familial events is intercut with a more personal narrative where a married couple questions their love for each other. The couple has intimate dialogues that are specific to their innermost feelings and philosophical ruminations on love and marriage, using the fishing town as an agent of change, which first agitates their romance, then replenishes it.

The film is also inventive in that Varda uses entirely different visual styles for filming the two worlds. She evokes the Italian Neorealist tradition for the fishermen, where non-professional actors are filmed living their ordinary lives almost in real time with seemingly little manipulation from the filmmaker. This documentary-style allows these sections of the film an unsentimental reality. Even the death of a child becomes a commonplace event in an unchanging world that’s only marginally disturbed by government officials. Varda skillfully mirrors the Neorealist concern with social and economic issues of working class people.

On the other hand, the couple’s world is highly stylized. Varda’s choices of uncertain, downbeat music, meticulously composed mise-en-scenes, symbolic inserts of images that intensify the couple’s dialogue and the choice of expressive settings are the foreshadowing elements of the French New Wave’s way of experimentation with the film form.

For instance, the couple’s walk on the beach or through town in lengthy tracking shots are intercut with static shots of crabs, a dead cat, eels caught in a net, a fork in the road, train tracks to match the tone and content of their conversation. As they speak about their failing marriage and how difficult they find it to relate to their love for each other, they’re inside the skeleton of an old wooden boat as if inside a womb, out of which their relationship will be reborn. Another noteworthy aesthetic choice is the unnatural framing of the actors’ merging faces. Varda’s compositions precede that of Ingmar Bergman’s stylistically influential Persona, filmed a decade after La Pointe Courte. Varda’s visual style is clearly an inspiration for the developing aesthetics of European art house cinema.

Varda interlaces her seemingly disparate storylines and visual styles in a way that draws attention to a major distinction in social and behavioral norms in French society. In contrast with the slow, flowing scenes of townsfolk’s daily struggle and acceptance of what they have and have not, the couple dissect and question their thoughts and emotions in a cryptic language, in discord with each other and their environment’s rhythms. Varda depicts a modern, urban couple moving around in a world they don’t belong, while life flows around them free of existential crisis. Their landlady’s statement, “They’re always talking; they mustn’t be happy,” sums up this distinction.

The intellectual, overwritten dialogue, coupled with erratic editing and an expressive music score sets the couple’s scenes clearly apart from the townsfolk’s. Varda, without seeming to do so, elicits commentary on life’s ironic contrasts with images, sounds and editing –the great weapons of film language– while remaining equally distant from both of her storylines.

From a modern perspective it is a hard task to enjoy a film like La Pointe Courte. It is remarkably slow-paced; performances are blunt; the plot is hardly engaging and the structure is fragmented. However, Varda’s invitation to step in and feel the film, as opposed to merely consume it, is a priceless gift for the modern film lover. Simply observing the ebbs and flows of a slice of life in a town called La Pointe Courte, and absorbing Varda’s artistic vision through images and rhythms is enough to appreciate what cinema has to offer.

–This article was originally published in Brattle Theatre Film Notes on July 23, 2017