How Mustang and Full Metal Jacket are really the same movie 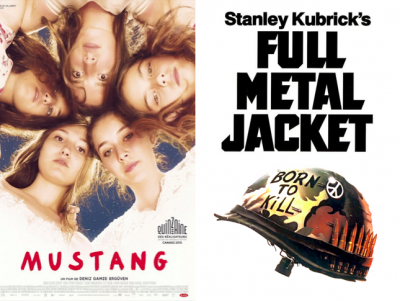 Finally I’m inspired to write about Blake Snyder’s much debated genre system. I am currently working on a script, the Snyder-genre of which is the wonderful and truly complicated Institutionalized. Because of this particular genre’s obvious challenges, such as working with an ensemble cast and voicing several standpoints on the merits of one Institution, I was in need of exploring the genre more deeply using worthy specimens that represent it in interesting ways. And what better specimens than Deniz Gamze Ergüven’s Foreign Language Film Oscar nominee Mustang (2015) and Stanley Kubrick’s Best Screenplay Oscar nominee Full Metal Jacket (1987). As you’ll see, comparing an unlikely pair of movies for the task will be more beneficial in order to fully understand the possibilities this genre offers.

The first of the three rules of the Institutionalized genre is that there needs to be a Group, an ensemble or multiple stories working for or against an establishment. There is a question of this establishment’s rules and ethics, and the possibility of breaking loyalty with it. Mustang’s five sisters and Full Metal Jacket’s marines are the Groups that are set against the cultural/traditional family institution in Mustang and the military institution in Full Metal Jacket.

Even though both stories are primarily about a group of people, it doesn’t mean that they don’t have heroes, through whose eyes the audience is invited to discover the storyworld and the ins and outs of the Institution the Groups are operating under. In Mustang the hero is the youngest sister, Lale (Güneş Şensoy), who has the most courage and wisdom to see through the system the girls are imprisoned by. She rebels against their grandmother by breaking a chair in the backyard in one of the opening scenes, setting the tone of the story to follow.

Similarly, Full Metal Jacket’s hero, Private Joker (Matthew Modine), demonstrates the most rebellious spirit in the Group by making his first ‘joke’ directed at the Institution representative Sergeant Hartman (R. Lee Ermey) in the opening scene. Both heroes are transparent and outrageous in their honesty and show the audience there will be no limits to what they can do.

Second rule of the Institutionalized genre is that there must be a Choice that tests whether the hero will stick with the group or quit – the main dramatic conflict of the story. In Mustang, as we watch the girls being married off one after another, we are left to wonder if Lale is going to submit to her destiny too, or will she put an end to the unjust system that reduces women to mere cattle. As the girls keep disappearing out of the cage they live in (presumably to move onto their next cage), the need for the Choice becomes more urgent and the resources to make it increasingly narrowed. After the third sister in line to join the institution commits suicide (a powerful All is Lost moment for the Group), things look more desperate than ever, making the potential prospects of the Choice even more hopeless.

In Full Metal Jacket, the Group, including Joker, is deeply entrenched in the system, practically trained to be mindless killing machines. But, there’s still the question of whether Joker too will become one of them, or will he hold onto his spirit and sustain his humane stance in the face of a war that seems to make no sense to even those who fight for it. As the Group finds itself face to face with a ruthless sniper with no back up to protect them, Joker has to come to terms with his best friend’s death – a similar All is Lost moment for the Group and particularly for the hero, who must now decide whether he will choose the Institution and take revenge or stand by his principles and symbolically destroy the Institution embedded in his heart.

The third rule of the Institutionalized genre is Sacrifice. Who is going to be the winner of this battle? Them or me? Will the hero surrender his/her individuality or beat the Institution, dismantling it, rendering it powerless, and most importantly, proving it was less than it was advertised to be all along.

In Mustang the Sacrifice is the security and the predictability of home and family. The last two sisters turn their back on everything they have and they know, possibly severing their bond with the older sisters. They risk their lives by attempting to go to Istanbul relying only on the hope that Lale’s teacher will help them out. It is the ‘inner spirit’ Snyder talks about that helps the hero make this tough decision of letting go of the Institution.

Full Metal Jacket portrays a more complex Sacrifice scene. For Joker the Sacrifice is that human capacity ‘to refuse to kill’, which is what originally set him apart from the rest of the Group. In contrast to Mustang, the hero of Full Metal Jacket seemingly chooses the Institution by killing the Vietnamese sniper face to face. This could be interpreted as Joker turning into one of the Group’s heartless killers, but it could also be interpreted as Joker choosing to put the sniper out of her misery and therefore not letting her suffer any longer as the Group suggests they should initially do. Joker emerges as a killer but one who has fully digested the tragic weight of such an act.

According to Snyder, there are three characters who are often featured in the Institutionalized genre. First is Company Man, who is rooted in the system and who has taken on its values as his/her own. In Mustang the grandmother is the Company Man. She clearly loves the sisters but she has learned the rules of the game and believes them as her own. Other elderly women who go along with the program represent how deeply and widely the system is accepted. Full Metal Jacket’s Sergeant Hartman and other soldiers who don’t question the system and even delight in being in the trenches are examples to Company Men.

Naif is another typical character found in Institutionalized movies. This is the ‘new guy’ who knows nothing of the rules and the person with whom the audience identifies and through whose eyes finds out about the system. Naif is often the hero. In Mustang it is Lale and in Full Metal Jacket it is Joker, who are yet to become institutionalized.

Brando is another must-have character for the Institutionalized genre and can also be the hero. It is the wild guy who is by nature opposed to the system and reveals its flaws. I think dramatically Brando is an essential ingredient that powerfully demonstrates the evils of the Institution. The heroes of Mustang and Full Metal Jacket both carry the Brando energy but I feel the real Brandos are the ones who take the most extreme measures to rebel against the establishment. In Mustang it is the third sister Ece (Elit İşcan), who quietly suffers and subtly revolts for most of the film, and finally commits suicide. Her suicide is so sudden and unexpected that its execution feels like a slap in the face of the system.

Full Metal Jacket’s Brando is almost identical in its behavior and impact on the audience. Private Pyle (Vincent D’Onofrio) has a smile on his face in the opening scene and is severely punished for it. That smile gets thoroughly extinguished, but he continues to be the bad apple of the Group to the point where the Group itself turns against him. Pyle’s loneliness is palpable. Even after he’s discovered to be one of the best gunmen and therefore becomes an accepted member of the Group, his despair keeps brewing. Like with Ece, we watch Pyle’s individuality exterminated and punished much more explicitly than others. Only when the marines are announced to have completed their training, meaning just when you think the torture is over, Pyle unexpectedly shoots Sergeant Hartman dead and puts a bullet in his own head. Like the one in Mustang, this is another suicide that comes out of nowhere and hits the audience with great impact. In both films, the sudden suicides leave the remaining characters and the audience dumbfounded – now fully aware of the depths of hell the Institution has prepared for them.

Mustang and Full Metal Jacket are set in different eras and geographies; they are about the oppression of different sexes; they represent different cultures with different historical backdrops and so on. And yet, in their essence they both tell the same story: a story about people who suffer within the confines of an Institution that is imposed upon them. They are surrounded, oppressed, limited, forced, denied freedom to be, to act, to choose, to express oneself, to have opinions and feelings of their own. No matter what the Institution is and who its victims are, from a mythological perspective, they are stories of imprisonment and the urge to break out.

Mustang and Full Metal Jacket coming together under one common genre provides a reason to celebrate the unchanging core of what stories are and how diverse and individually potent they have the potential to be.