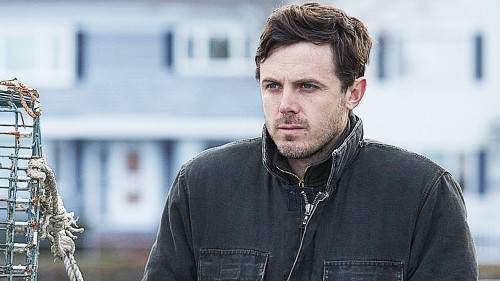 Kenneth Lonergan’s Best Picture and Best Original Screenplay Academy Award nominated Manchester by the Sea is the most compelling screenplay I’ve come across lately. I deeply enjoyed breaking it down to its parts to better understand how it was so effectively and economically put together.

This breakdown is based on Blake Snyder’s beat sheet method. Please read on if you’ve already seen the movie! Enjoy!

Opening Image
Three boys in one beloved boat, on one beloved ocean. Lee (Casey Affleck) kids around with his nephew Patrick as his big brother Joe (Kyle Chandler) helms the boat. They are connected through the ocean and their love for each other.

Set-up
Lee works as a janitor, servicing the residents of four apartment buildings. His character is set up by its contrast to the people whose lives continue uninterrupted despite his presence in them. The residents have relatives, responsibilities, plans, schedules, worries, and preferences, whereas Lee is a blank page, as if without a past and a future, a socially inept bypasser, there to unclog and repair and nothing more. Lee is portrayed as someone who has picked a life of doing the dirty work of lives lived by others – a man outside of the rhythmic continuity of other people’s lives.

Lee has a temper, cause of which is yet unclear. When he is pushed or when he is alone, he stumbles into trouble. He cannot connect with people, except when he quenches his thirst for connection by needless violent outbursts.

When Lee heads back into Manchester following the Catalyst (see below) his past is slowly revealed, establishing what the ramifications of this ‘catalyst for action’ might mean for Lee, what’s at stake and what he must overcome to meet his challenge.

Theme Stated
Following Lee’s unexpected indiscretion with one of the residents, his boss has a chat with him. He tells Lee that he can’t be so careless and unpleasant in life, implying that Lee simply doesn’t fit in a civilized world. This first challenge to Lee’s deep-seated attitude towards life shows us that we’re about to explore whether Lee will be able to re-enter the social, connected world. Will he make an effort to get along? Will he make room for others?

Catalyst
Lee gets a call from the hospital: Joe had another heart attack. He drives back to Manchester as he did so many times before, but this time Joe is dead. Manchester is calling for Lee to tend to Patrick and, in doing so, to pick up the pieces of his own life.

Debate
According to Joe’s will, Lee is to become Patrick’s (Lucas Hedges) legal guardian and look after him until he turns 18. So the central debate question is, ‘Will Lee accept the duty of being a guardian to Patrick?’ But, since Patrick has a lot to lose by leaving Manchester to live with Lee and Lee has no real excuse to stay in Boston, the real question is ‘Will Lee move back to Manchester?’ When Lee is hit with this question in the lawyer’s office, his tragic past is revealed to intensify what this move might mean for him. How near impossible a task is being asked of him. In light of his personal past, the guilt he feels for what happened to his family, will he be able to stomach living in Manchester again, let alone take responsibility for another person?

Break into Two
Lee doesn’t see sending Patrick to live with his mother as an option. So he decides to temporarily move to Manchester until he figures something out and move them both to Boston. But even before a clear moment of decision occurs, Manchester has already sucked Lee in. He is already engaged in the daily tasks, responsibilities and decisions for Patrick’s life; he has already assumed a parental position.

Fun & Games
Lee and Patrick’s life together. Patrick’s daily schedule, friends, girlfriends, school, sports teams, music band, his boat, his problems come at Lee with full force. Lee’s dull and subdued personality, and unwillingness to function as a giver of guidance, support and discipline, starkly contrasts Patrick’s ease in his social connections, and outspokenness about his desires, fears and goals. Lee’s callousness vs. Patrick’s liveliness provides an entertaining respite from the grief they are yet to process.

B Story
Despite their differences and the inconvenient circumstances they are brought together in, Lee and Patrick bond. Patrick is social, popular, pumped up with hormones and desires, love, humor and gusto. He is at the center of a web of connections, bubbling with life. He is the antithesis to Lee’s disconnected, unwilling, dispassioned shuffle through life. Their evolving connection becomes a point by which the theme of the film is discussed: will Lee integrate back into society with the help of his new role as a guardian to Patrick?

Midpoint
Patrick has an emotional breakdown – a rare occasion where he abandons his carefree attitude and falls into the claws of grief over his dad. When Patrick is confronted with stacks of frozen chicken and a sudden onslaught of grief overwhelms him, Lee does his work as a compassionate, loving guardian. This is a moment when we feel the transference of their shared suffering. We ask: could Patrick be the antidote to Lee’s deep feelings of guilt and sorrow?

Bad Guys Close in
Lee lays down what will happen to Patrick: temporary stay in Manchester and then move to Boston. Patrick is cross with Lee; the tension between them builds. On the other hand the boat is in bad shape and will require either selling or investing in, both of which don’t quite work for either of them. More pressure is introduced when Lee looks for jobs in Manchester but it’s clear the townsfolk still holds some grudge against him. Furthermore, despite Patrick’s hopeful attempt, Lee proves to be less than capable of making even small talk with another person.

A big blow comes when Patrick’s –and Lee’s– last hope for finding Patrick an appropriate guardian falls through. Patrick’s mum and her fiancé are clearly not the right match for him. Finally, it’s obvious that Lee and Patrick are stuck together. To counteract this disappointment, Lee finds a way for them to keep the boat and gives Patrick a break to enjoy his girlfriend – two sweet gestures that ease the tension between them. But soon Lee will encounter the biggest challenge of all…

All is Lost
Lee runs into his ex-wife Randi (Michelle Williams) pushing a stroller down a Manchester street. Randi’s confessional apology has a shattering effect; the love and pain between them are palpable. Lee is crushed under the weight of Randi’s compassion and the knowledge that it is too late to mend their unsalvageable, grief-stricken relationship.

Dark Night of the Soul
Lee’s self-destructive defense mechanism takes effect immediately. He starts a bar fight and gets damaged enough to prove to himself that’s exactly what he deserves. What’s more, in a heart-wrenching moment, he sees his dead children warning him of a fire he’s about to cause. Lee’s jolted out of his stupor to tend to the spaghetti sauce burning on the stove. This classic Dark Night of the Soul moment underlines the haunting nature of Lee’s grief.

Break into Three
Lee does the only thing that he can do under the circumstances. He arranges Joe’s best friend to adopt Patrick. He tells Patrick that he simply cannot stay in Manchester, because he’s too heartbroken, because he can’t beat his demons.

Finale
Joe is finally buried on a spring day. Lee has a job in the big city and is looking for a bigger place to live. When asked why that is, he explains the extra room is for Patrick to come visit. Lee and Patrick bounce a ball between them as they continue to bicker. Regardless of how happy or unhappy they are now, it is clear that Patrick continues to live the life he chooses to live, and Lee has picked a safe zone for himself to function and made room for another person.

Final Image
Lee and Patrick are out fishing on their boat – the only common ground quiet and gentle enough to hold the connection between them.