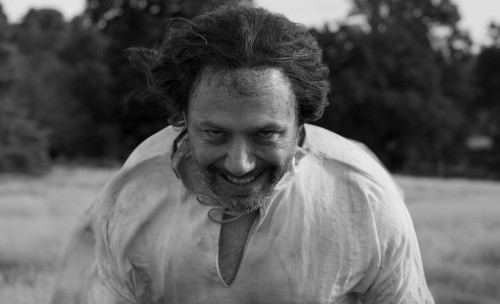 A field suggests possibilities; its openness welcomes any old soul to seek his treasure; its terrain allows all sorts of physical or spiritual pursuits. The title, A Field in England, immediately brings to mind a vivid image, and gives away a carefree attitude about which field is the one in question, and what happens on it. The obscurity and infinite possibilities of the film’s narrative and style are hinted at first in the title.

Director Ben Wheatley and screenwriter Amy Jump’s field is a simple field adjacent to a battlefield. Theirs is one of possibilities for personal battles, discoveries, treasures, friendship and mind-altering mushrooms. Unsurprisingly, A Field in England cannot be contained in a single genre category, confined by one aesthetic style or another, or limited by the use of a distinct narrative device or two. It mishmashes a number of devices and forms, as well as lenses, sound effects, visual effects and music.

It is recognized as a historical psychological thriller, and while it has elements of all of these genres (and more), it also defies their conventions and expectations. Though clearly set in another century, we are not informed of its 17th century setting, as this information is not altogether relevant. The costumes and dialogues are perfectly naturalistic to the period, hence giving the film an air of realism, and yet it makes no effort to reveal its historic background and the culture in which the story takes place.

The film is more interested in the simple crevices of its four main characters’ psyches, but only as they succumb to the influence of the mushrooms they eat. Mostly, their goals and conflicts with each other are in plain sight, rather than obscured by some psychological dramatization.

As for the thriller/horror aspect, even though there is some gore involved in this classic tale of battle against evil, and unsettling events involving a skull, a smoky black sphere, and blood-curdling sounds of a witchcraft session do occur, these details are as humorous as they are disturbing.

A Field in England is more accurately an unexpected cross between (1) a British take on a classic Western in which hats, pistols, camaraderie and male bravado are the order of the day, with a characteristically British field taking the place of mountains and deserts, (2) a road movie, which has a singular goal, though it does shift from reaching an alehouse, to recovering some documents of alchemy, to finding a treasure, to outwitting the villain to save oneself, and (3) an allegorical comedy on the effects of mushroom circles, ruminations on occult mysticism and forming unlikely friendships along the way.

The shifts in genre are accompanied beautifully by the episodic changes in camerawork, editing, sound and music. The first quarter of the film is devoted to the chaotic impact of war on the bodily senses. The camera captures macro images of eyes, juxtaposed with frantic images of grass and weeds. Soon these settle into a rhythm of longer, calmer shots showing the characters getting to know one another. Tabloid images of the men uniquely invoke paintings in which characters theatrically enact a period we can no longer experience or even imagine. As we are plunged into the fake reality of this time, music remains more instrumental and sound design more realistic.

Once the mushrooms are introduced, there is a literal reenactment of the idea that it may take four men and a rope to pull one out of a mushroom circle. The fast-paced, cartoonish editing of this scene naturally gives birth to the warped images of the characters as they go deeper and deeper into their nightmarish, violently psychedelic state. Strobe effect, split screens where images fold and shift around, fast cuts between two simultaneous events that speedily convey information to the audience are a few of the radical methods Wheatley mixes together.

The relentless wind, the unnaturally quiet, echoing voices, increasingly electronic tones in the music, and the narrative genius of a reappearing dead man take the ever-escalating insanity of the story to new heights. By the time the wind dies down, the grass relaxes, the dirt settles, and our hero stands triumphant, Wheatley brings us full circle to the adjacent battlefield. Only now, the hero has achieved his goal; he is no longer the fearful, desperate, lonely man he was at fade in. Despite all the weirdness of its aesthetics, Wheatley manages to sustain a conventional tale of friendship, attainment of goals and personal change.

A Field in England is a refreshing modern specimen of the avant-garde movement, and a celebration of guerilla style filmmaking. Its professional amateurishness and elegant mixing of aesthetic expressions create an abstract beauty for modern cinema-goers to treasure for years to come.

— This article was originally published in Brattle Theatre Film Notes on January 16, 2017