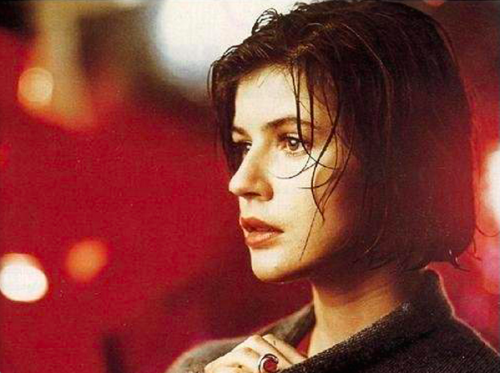 Three Colors: Red (1994) is not only the last film of brilliant Polish filmmaker Krzysztof Kieslowski’s acclaimed Three Colors Trilogy, but also his farewell gesture to the art of cinema. It is fitting that a film marking the end of a great cinematic career should be about connection, truth, fate, disappointments, and passing of lessons learnt. The compassionate, naïve, and optimistic Valentine (Irène Jacob) and the jaded and cynical retired judge Joseph Kern (Jean-Louis Trintignant) are two halves of the same apple, that is to say, two opposing sides of the aging filmmaker Kieslowski.

Out of compassion for a dog she ran over, Valentine delivers the wounded animal to its owner, Joseph Kern, an ex-judge spying on his neighbors’ phones. From then on Valentine’s world opens up to new and controversial ideas about life, love, privacy, truth, and justice. Kern proclaims there is more truth to be found in people’s secrets than in courtrooms. He laments the only reason people do good deeds is out of guilt, that true compassion doesn’t exist, and love is borne out of an inherent selfishness.

Valentine is repelled at first by Kern’s self-righteous ideas about invading people’s privacy to learn their secrets. She clings to positive expectations of people, an attitude which has survived a heroin-addicted brother and a jealous and demanding, but absent, boyfriend. She lives a life of impending disappointments and yet attributes love and optimism to all that happens around her. To reveal Valentine’s condition, Kieslowski often shows her alone in her apartment, waiting for phone calls, slipping or tripping, struggling with breathing through ballet postures, “hoping for peace and quiet.” Kern teaches Valentine from his vast experience what people can really be like, opening her eyes to secret truths about them. Valentine’s youth, and the naive optimism that comes from her youthful disposition, obstruct her from seeing life as it is.

The judge reveals to Valentine that his career was practically a sham, a string of mistakes and near-misses. Who’s to decide who’s guilty and who’s innocent, who will turn out good and who will not? Valentine’s initial judgment of the judge wavers. She loses her pride and learns humility. She begins to see that one cannot judge another based on what they do, that fate is malleable, and life changes directions by moments of chance. As Valentine’s youthful rigidity softens, Kern enlivens and garners hope for that same changeability. He begins to live out a missed opportunity that could change his life forever, through Valentine’s life still full of possibilities.

Meanwhile, Auguste (Jean-Pierre Lorit), a young judge whose life echoes Kern’s life so closely that he might be interpreted as Kern’s doppelganger, is betrayed by a woman who offers personalized weather reports by phone. Despite her prediction, a sudden turn in the weather almost kills Valentine and Auguste in the same ferry ride, once again asserting the unpredictability of life. The accident kills over a thousand passengers, but only Kieslowski’s main characters from the Three Colors Trilogy survive it. As demonstrated by the highly anticipated union of Valentine and Auguste, Kieslowski ends the trilogy with a note of compassion and hope for a new life with new possibilities.

In Kieslowski’s hands the crime of invasion of privacy turns into a meditation on connections between lives and choices, a bridge into a theme often found in his work: shared experiences, the smallness of the world, the mysteries of chance and fate. Kieslowski’s camera conveys the same theme cinematically. It wanders through the streets and apartments, settling on characters as if by chance. The camera movement feels like a breeze, as if to question “what is life?” Kieslowski depicts life like a loose cannon, taking this road and that, “so why not another?” it seems to be asking. All it takes is a look in another direction, an impulse, a signal from a quivering radio frequency, and life can be transformed forever.

The color red – with its many opposing symbolic meanings – saturates the screen, seen on objects, clothes, images, lights, dotting with precision every corner of the screen. Red means love, life, anger, caution, passion, life, death…. The color’s many meanings and contradictions denote the infinite potentials of a young woman’s life versus the many lessons to be learned from an old man’s life albeit its now limited possibilities. The color red is a fitting tie between all the characters of the trilogy and all the themes of Kieslowski’s artistic legacy.

Kieslowski was all too aware of the filmmaker’s position as a god of some sort, an all-seeing authority dictating the audience’s gaze, opinions and even feelings. In his last film, a judge, no less, is portrayed as one who has given up on delivering judgments, a judge who has accepted the impossibility of judging people and life. In his farewell film, Kieslowski entrusts his wisdom of a full life with the character of Valentine and his audience. He ushers her and us into a life of possibilities filled with infinite links and connections.

— This article was published in Brattle Theatre Film Notes on July 13, 2018