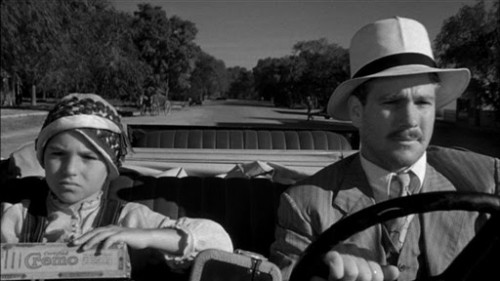 Hopes and dreams are a significant part of who we are as human beings. Peter Bogdanovich’s Depression era comedy/road movie Paper Moon artfully reflects that human need for dreaming. Ryan O’Neil’s Moses Pray and Tatum O’Neil’s Addie make a pair that brightens the sullen backdrop with their determined expectation of good things to come. Addie’s cunning ideas and sharp attitude are just what Moses needs to survive the hopelessness that surrounds them. Despite the comedic buddy-movie sensibility of the film, Paper Moon focuses our attention time and again on the melancholy symbolism of a paper moon the duo delicately balances on as they go through their adventures.

When Paper Moon opens, life feels bleak. The landscape is dismal. Addie’s mother has just died. Moses’s desperate attempts at conning widowers for small profits halt as he attends the funeral. The eagerness with which Addie’s relatives unburden themselves of the newly orphaned girl represents the dominant mood. This is a world where even a nine-year-old girl needs to fend for herself.

It is significant that a funeral opens the film, sending the message that nothing lasts. As Addie smokes away her troubles in motel rooms, we are merely in an intermission before the next thing runs out on the couple. Sometimes it’s money, sometimes it’s a car, and sometimes it’s a companion that is lost. The temporariness of everything else is ironically what gives birth to a bond between the two misfits—the only one that promises permanence. On the surface, what holds them together is Moses’s two hundred dollar debt to Addie, but in truth it is their reliance on each other to keep their hopes and dreams afloat.

Trixie Delight’s (Madeline Kahn) appearance in the film threatens the fine balance between Moses and Addie. A perfect match for them, Trixie means competition to Addie. She’s a prostitute also looking for her lucky break, which she hopes to be Moses. Just as Addie plots to get rid of her, Trixie opens up to Addie about her true intentions. Her submission to failure is heartbreaking as she begs Addie to give her a break: “…if you wait it out a little, it’ll be over, you know. I mean, even if I want a fella, somehow I manage to get it screwed up. Maybe I’ll get a new pair of shoes, a nice dress, a few laughs. Times are hard.” Addie recognizes Trixie’s implausible, paper-thin dreams and lets her enjoy her brief moment.

The deputy that catches the duo for bootlegging, their most profitable venture yet, begins his interrogation with “Just when ya think ya got it made… Just ain’t made, is it?” Despite Moses and Addie’s comic disputes and amusing getaways, Paper Moon is imbued with cynicism. It keeps circling back to the same message: However hard you try, you’ll never get it made.

László Kovács’s cinematography echoes the tentativeness of achievement of money and success in Paper Moon. The depth-of-field of Kovács’s black and white photography makes every corner of the frame look in focus. The flat and crisp images invite the audience to pay attention to everything. As a result, the main characters on the screen are just as important (or unimportant) as the supporting characters, the set design, and even the surrounding landscape. By projecting a glasslike, fragile world, the extreme depth-of-field not only reduces the characters’ significance, but also gives the visuals a paper-like quality that accentuates the vulnerability of the characters’ goals and emotions.

The actual image of the paper moon appears at a carnival scene where Addie badly wants a picture of herself and Moses seated on top of the moon. Moses is too busy to grant her wish. Addie walks away from the booth deeply disappointed, saying, “He’s not my father.” Addie’s photograph sitting on top of the paper moon alone becomes her emotionally charged parting gift to Moses in the finale. Having been dropped off at her aunt’s house, the gift represents her relinquishing her biggest dream, that of belonging to him as her father. It is the image of lonely Addie sitting on a paper moon that softens Moses’s resolve to leave her behind. That and the fact that his car won’t start, which makes a meaningful comic reference to the pattern of things falling apart around them, conversely working to their advantage at last.

Roads are natural staple images of road movies. In the final image of Paper Moon, the road that leads to nowhere on the infinite Kansas landscape is photographed statically from behind Moses and Addie’s car. It is one of the few occasions in the movie where the characters face away from us. The image of the winding road leading to the unknown is a fitting one that marks the unknowability of Addie and Moses’s future. But fortunately for them, they are armed with their dreams, even though we know those dreams are barely clinging to paper moons.

— This article was originally published in Brattle Theatre Film Notes on January 29, 2018