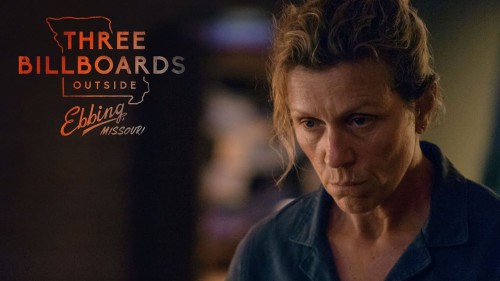 Every year I deconstruct my favorite screenplay of the year in a beat sheet format developed by Blake Snyder. This year it happens to be Martin McDonagh’s Three Billboards Outside Ebbing, Missouri, which just won the Golden Globe for Best Screenplay and is a strong candidate for the Oscar in the original screenplay category among others. Enjoy!

Opening Image
Mildred (Frances McDormand) spots three deserted billboards as she drives along an empty road. A light bulb goes off in her head.

Catalyst
Mildred buys advertising space on all three billboards. This is the catalyst for action mainly for the police officials she’s targeting, but it also marks the start of Mildred’s journey into reaching out to the authorities and the public with her pain.

Set-up
The billboards are unveiled, as is the story behind them. The various reactions to the billboards set up Mildred’s friends and foes as well as her personal motivation and goal. Her son Robbie (Lucas Hedges) is one of the few people whose opinion and feelings matter to Mildred, but even Robbie’s disapproval doesn’t stop her. While Mildred’s colleague from the gift shop (Amanda Warren) is her only supporter, her adversaries are many and furious. The main target for the billboards is Chief Willoughby (Woody Harrelson), whose terminal illness accentuates the conflict between the characters, but it is Dixon (phenomenally portrayed by Sam Rockwell) who takes it to heart and will have the longest distance to go in his transformation.

Debate
Throughout the film the biggest debate is about whether the billboards will stay up or not. Can Mildred be convinced to take them down, or not? First the legality of the billboards is questioned, and then Mildred’s resolve is tested by the police and the locals. Willoughby’s attempt at reasoning with her hits a dead-end when he figures that Mildred had already known about his cancer, but doesn’t care.

The billboards are the source of a battle of wills between Mildred and pretty much everyone else, and it looks like Mildred will win.

Theme
The last effort to get Mildred to take the billboards down comes from the moral beacon of the town, the priest. He says, ‘No one’s on your side about this.’ The central conflict of the story is alluded to: we will be exploring the possibilities of whether Mildred will succeed in pulling people to her side to bring justice to a now disregarded horrific crime. Will the police and the public get over their shame and discomfort to finally face the reality that such vile crimes are committed amongst them.

Mildred’s goal is not solely and simply forcing the police to solve the crime, but to remember it, face it, and do something about it, in their action and in their hearts.

Break into Two
Mildred coolly and beautifully reacts to the priest. The gist of it is ‘Get the f**k outta my kitchen.’ We now know that if this is Mildred’s response to a priest, the billboards are here to stay.

Willoughby on the other hand, having received his own ‘catalyst for action’ to solve the crime in his few remaining days, lashes out at his doctor for comforting him at Mildred’s expense. Willoughby is taking none of it, because he knows that as crazy as she is, Mildred is right and he now knows what to do. Both Mildred and her adversaries move into their second act of growth.

Fun & Games
Willoughby tries to make it right by giving the case another shot before he dies. Mildred responds to and deflates the increasing pressure against her and the billboards. In a beautiful and tragicomic one-two punch Mildred injures the town dentist and Willoughby coughs up blood into Mildred’s face during her interrogation. They may be on opposite sides of an argument but in this scene they share an intimate moment acknowledging each other’s suffering.

This is also the section where we go deeper into Mildred’s personal demons. Her guilt around what’s happened to her daughter (Kathryn Newton) and how her desperation for justice is mixed with her need to do right by her daughter. Her sense of failure crystalizes in her exchange with her ex-husband (John Hawkes). One more dimension is added to her guilt when she finds out her daughter wanted to move in with her father to get away from her and if she had she might have lived.

As Willoughby finds his own answer to his dilemma by plotting a premature but dignified exit, Mildred hits a peak point in her journey when she lets down her guard, addressing a fawn that symbolizes her daughter. We ask: Has she done the right thing by opening this can of worms when the case has little chance of being solved? Was it worth turning everyone’s lives upside down, letting the pains of the past resurface and dig deep into their hearts?

B Story
There is a dance that happens between Mildred and Willoughby and Dixon throughout the film. Willoughby fights her but he feels for her, even agrees with her. His parting gesture expresses his faith in the possibility of goodness in the world. He has manifestly joined Mildred in her quest for unification against rape and violence.

Mildred’s dance of compassion continues with a much different version of Willoughby in Dixon. Dixon, suffering from a slow-burning moral compass, questionable intelligence and typically male anger, is infuriated by Mildred’s position. It takes longer for him to unite with Mildred, but with Willoughby’s help he recognizes the goodness in himself that will move him closer to her.

It is in Dixon’s transformation that Mildred’s internal journey lies and it is in the B Story between Mildred and Dixon where the theme of the film is discussed.

Midpoint
Willoughby kills himself. As a result Mildred’s doubts and guilt about the billboards reach a new height. She now has to face a town outraged by Willoughby’s suicide, which they naturally view to be Mildred’s fault.

Bad Guys Close in
As a response to Willoughby’s suicide, problems escalate in Ebbing at a fast pace. The suicide has done no favors to Robbie’s already vulnerable position at his school. Dixon throws the ad agency guy Red (Caleb Landry Jones) out the window for putting up the billboards in the first place. On top of his grief over Willoughby Dixon loses his job, his one reason for leading a decent, lawful life. A creepy guy (Brendan Sexton III) threatens Mildred’s life when he walks into the gift shop claiming to be responsible for her daughter’s violent death. Willoughby’s widow (Abby Cornish) brings Mildred a letter from her late husband, further clenching Mildred’s heart.

Willoughby’s letter is a relief from the increasing tensions of the story, but it does nothing but further raise the stakes. Willoughby has done a good deed by renewing the monthly rent for the billboards, but this only results in somebody setting fire to them. The fire represents the culmination of conflict around the billboards, which will in turn give birth to Mildred’s most vengeful retribution yet.

All is Lost
Assuming it was the police that burnt down the billboards, Mildred sets fire to the police station. Little does she know that Dixon is in the building receiving words of wisdom from Willoughby’s letter, marking the beginning of a shift in his journey.

All is lost for Mildred as she realizes that in her rage against violence and injustice she almost killed Dixon and she now faces potential jail time and, most importantly, the loss of her battle.

Dark Night of the Soul
Thoroughly bandaged and imbued with Willoughby’s faith in him, Dixon makes amends with Red in the hospital. He’s no longer a brute, but a victim.

Mildred in her own way uncharacteristically softens when she goes out on a date with the town midget James (Peter Dinklage). She even shows signs of coming to terms with her ex-husband’s infidelity when she wishes well on his new relationship, advising him to treat her well – a common decency she herself didn’t receive.

Break into Three
The billboards go back up! The war is still on. In the meantime, as foretold by Willoughby, Dixon overhears the confession of a brutal crime against a woman. He may no longer be a cop, but he has a chance to make things right by Mildred after all.

Finale
Dixon’s potential offender turns out to be not the man who killed Mildred’s daughter. But, driven by the purposelessness of his life and his newly acquired taste for justice, he suggests to Mildred that they go after this guy anyway. He may not be the guy they’re looking for but he’s still a vile criminal, who’s ought to be punished. Mildred agrees.

Final Image
Mildred drives along the billboard road with Dixon shotgun, going after revenge and justice. They know that neither of them is likely to pull the trigger on the guy, but that’s not the point. Mildred has succeeded in her feat: she drew attention to an unacceptable crime, fuelled the hearts and minds of the police and the public to stand against crime against women. And most importantly, she now has the support of Dixon, her unlikely partner in doing the right thing against all odds.