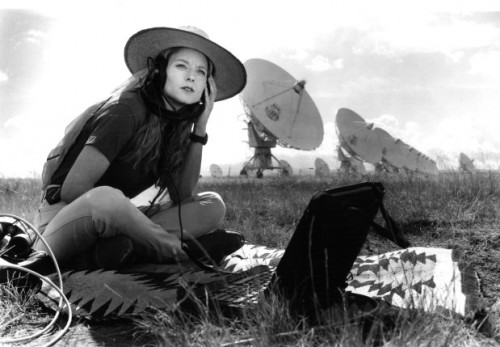 Robert Zemeckis’s Contact is a rare science fiction movie about humanity’s first attempt at making contact with the Extraterrestrials. The film’s representation of aliens is in many ways unique, but it’s Zemeckis’s approach to yet another underrepresented and often misunderstood species that makes the film exceptional, namely the terrestrial woman.

Twenty years after its release, Contact remains an outstanding depiction of not only a woman scientist, but one who is bright, strong, passionate, ambitious, stubborn, daring, unapologetic and -lo and behold- single and not looking. Ellie, portrayed by one of the ‘90s’ fierce female leads, Jodie Foster, succeeds in her fight against an army of men whose main objectives are to shape her into the scientist they are comfortable seeing – not one that wastes her potential on a laughable pursuit as discovering aliens. Since her work is ultimately funded by her male colleagues, she depends on her relationships with men to persist in her scientific goals. And somehow, remarkably, she hangs in there long enough to get the men’s attention.

Ellie’s fascination with Extraterrestrials has its roots in her deep-seated feelings of loneliness. As an 8-year-old she asks her dad if they could talk to her deceased mother via radio signals. Her desire for traveling into the heart of an abyss in search of the unattainable is somewhat romantic, if not melancholic. Herein lies Ellie’s inner conflict: she’s a scientist who only believes in the provable, tangible reality, primarily concerned with gathering empirical data to prove we are not alone in the universe. However, her desire comes from a place, not reason, but of love and a longing for existential truth. Ellie, as a female hero, is a complex amalgam of an unshakeable realist and the hopeful romantic, which makes her even harder to stomach for her male counterparts.

Ellie’s inner conflict is put to the test by her relationship with God and religion. Despite her academic qualifications and personal discovery of the alien signal, she is severely interrogated based on the male perspective that a representative of humanity must believe in a conventional understanding of God and faith. And what that conventional understanding teaches is that male superiority and domination is a natural truth in the patriarchal social organization. Ellie’s very being, regardless of her religious beliefs, complicates and challenges that assumed dominance.

Never mind all that she has accomplished, in the eyes of her male counterparts, she has already failed the test. This unexpected blow to her goal of travelling to a distant star comes from a place of rigidity, intolerance, and stern didacticism – presented as primarily male attributes in the movie. Even though her underlying goal is ‘connection’ – a most Godly notion demanding spiritual communion over an inert acceptance of God, she is reprimanded for her lack of blind faith. While her nemesis is celebrated for his faith in something he’s not even seeking to connect with, Ellie is rejected because she chooses to reach for and commune with God keep searching.

When Ellie finally gets a chance at making the journey to the star system Vega, her meeting with the Extraterrestrials is one that ironically requires reliance on personal, visceral experiences, rather than tangible evidence. In Contact, the alien species proves to be a shape-shifting yet comforting presence. They download Ellie’s memories and appear to Ellie in the form of her father and in a setting that is familiar and special to her. Contrary to the way aliens are typically represented in the movies, either as grotesque, threatening monsters or big-eyed, charming, wise messengers, Contact offers a truthful, honest and compassionate being that remains unknowable. Zemeckis seems to believe that since all we have about aliens are theories and speculations, humanity is not yet ready for them, and he presents us with a plausible picture as the beginning of what is likely to be a long conversation.

Though Ellie comes away transformed from the experience, back on Earth, things have not advanced very much. Strangely, the very men who had no trouble believing in a grandiose idea of God without any direct or indirect experience, have trouble believing a woman’s word that she has made contact. They want proof; they blame her for hallucinating, dreaming, and even fantasizing as a result of her personal losses. She is no longer a cold scientist, but a delusional woman. The antagonistic forces modify their attack tactics, but one thing remains unchanged: Ellie is not to be heard.

In Contact, women and aliens are rejected, feared and unwelcome. Ellie has more in common with aliens of Vega than with the men of the Earth. The film makes a final point that proves Ellie’s experiences in Vega were true, after all. Ellie never gets to find out about this proof. She doesn’t need it. She will continue her exploration of the unknowns of the universe, not with faith imposed on her by others, but with a ‘sense of adventure’ all her own.

— This article was originally published in Brattle Theatre Film Notes on April 8, 2017