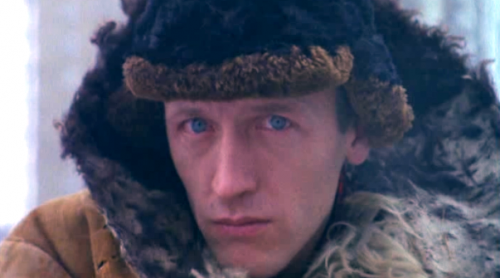 Polish master filmmaker Krzysztof Kieslowski’s Dekalog is a unique film project based loosely on the Ten Commandments. Kieslowski’s dramatization of the ten religious ideals owes its success to his keen understanding of the complexities of human nature and morality. While the films speak volumes about the human condition and the moral structures we live by, they also refrain from judgment, preaching and dogmatism.

There are a few major threads running through the films. All ten films are either set in or start off from the same apartment complex. This typical eastern bloc setting functions like a pair of gloves, holding the ten stories together. The characters are not only neighbors but also represent a panoramic set of human conflicts stemming from one cultural, religious and socio-economic source.

Another, and an even more interesting common thread is the recurring character of Artur Barcis. He appears in almost all films as a passive bystander who makes eye contact with the protagonist, but doesn’t interfere by action or words. There are many interpretations of the meaning and role of this enigmatic figure. Judging by the pivotal moments he appears, I’m inclined to think of him as the Angel of Death. Most poignantly, he is a homeless man sitting by a frozen lake, which will eventually break and kill the protagonist’s son in Dekalog: One, and an orderly in the hospital where the protagonist’s husband lies in his deathbed In Dekalog: Two.

Dekalog: Five, the feature-length version of which is A Short Film About Killing, is the only film where the Angel of Death comments on the protagonist’s action by imperceptibly shaking his head. Jacek, who is on his way to kill a taxi driver in a famously long and arduous attempt, retreats into the shadow of the taxi upon looking directly into the eyes of Death. Later, Death reappears in the corridor when Jacek is sentenced to death, marking yet another killing, this time the hero’s.

In Dekalog: Six, aka A Short Film About Love, Death plays an altogether different role. When Tomek secures a date with Magda, he joyfully circles the courtyard dragging his milk cart. Death, for the first and only time in the series, smiles at the hero, enjoying the exhilarating and yet temporary nature of love and happiness. Milk –another motif that appears in most Dekalog films– represents Tomek’s innocence, which is about to be lost following his brief but painful love affair with a sexually promiscuous older woman. Later, when Tomek’s date ends in humiliation and disappointment, Death watches Tomek, albeit this time in dismay, run back into his building to attempt suicide.

In all ten films Kieslowski uses death, literally and metaphorically, as punishment, threat, or simply the outcome of actions. In Dekalog: One, the protagonist is literally punished with the death of his son because he favors science over faith in God. In Dekalog: Two, the heroine begs the doctor to predict whether her husband will survive his illness. Her decision to keep or abort her illegitimate pregnancy depends on the doctor’s medical opinion, which is tinged with his own direct experience with death and suffering.

In Killing, Jacek’s decisions and actions directly cause the death of the taxi driver. This seemingly pointless killing results in his own death carried out by the State. In Dekalog: Eight, the professor knows if she sends away the Jewish girl at her door she will be killed. Even though the girl survives and comes back to confront her, the professor’s life is plagued by her choice to send the girl to her death. In Dekalog: Nine, the woman’s moral choice of infidelity results in her vulnerable husband’s suicide.

In some Dekalog films death is symbolic and takes many forms. Most prominently in Love, Tomek sacrifices his innocence for love, and later attempts to give up on his life. Magda in return exercises a bitter revenge by shattering Tomek’s idea of love, but by doing so, her bitterness dissolves and she is healed.

In Dekalog: Three, a man and woman dwell in their shared past, risking their current stability and happiness. In Dekalog: Four, a father and daughter play with fire when they entertain the thought of their union as lovers, risking their lifelong bond as a family. Dekalog: Seven tells the story of a young woman whose identity as a mother is robbed from her by her own mother. In the end she realizes her identity as a mother is forever lost.

In the last and only comedic Dekalog film, Dekalog: Ten, it is the death of their father that brings together two estranged brothers. As they lose themselves in the material pursuit of protecting their father’s heritage, the trust between the brothers is compromised, signifying a sort of death as a result of greed.

The Dekalog series is a joy to watch together. One can spot the crossing of the paths among the characters, experience the atmosphere of the setting through the lenses of nine different cinematographers, dwell on the meanings of recurring motifs such as milk, blood, glass and water in its different forms, not to mention tracking who I call the Angel of Death appearing as a symbol of death on various occasions in various forms. Most of all, it is the web of moral decisions and their consequences that makes Kieslowski’s saga of human conflict and suffering most attractive.

— This article was originally published in Brattle Theatre Film Notes on December 6, 2016