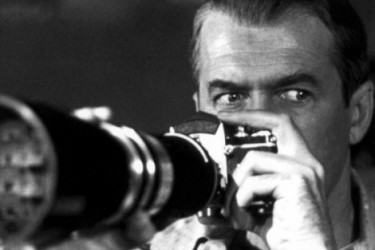 If we had to pick a single film from Alfred Hitchcock’s individually unique and brilliant filmography to stand as his cinematic signature, it would undoubtedly be Rear Window. It is the most literal expression of his fondness for our ‘peeping tom’ nature and a great example of his expert coalescence of suspense and humor. Disguising what is primarily a love story, the murder mystery in Rear Window is a classic Hitchcockian tale seen completely from the point of view of the protagonist.

Hitchcock establishes his voyeuristic vision for the story as early as the film’s opening credits. As the blinds roll up on Jeff’s (James Stewart) windows, we are positioned looking out into a courtyard where a cat walks up a staircase and leads us to scan the neighborhood on a hot, lazy morning. Jeff’s nurse Stella (Thelma Ritter) further emphasizes the suspiciousness of our guilty gaze by scolding Jeff: “you see something you shouldn’t see and you’re in trouble.” She will keep badgering on about how she can smell trouble as she helps out the wheelchair-bound Jeff, who can barely satiate his photographer’s curiosity by watching his neighbors.

Hitchcock’s comically obvious approach to creating an expectation of ‘trouble’ coincides with the real trouble Jeff is working with. A dark shadow looms over him as he opens his eyes to find Lisa (Grace Kelly) – the true source of his conflict. As with all Hitchcock films it is the human psychology, emotion and sexuality that are in the forefront of the suspenseful murder story. ‘Will Jeff fall in love with Lisa and surrender to married life’ is the central dramatic question, for which the murder mystery is merely an agent of change.

The neighbors not only contribute to the murder story, but also create a panorama of romantic relationships: a contented married couple, an unhappy married couple, a pair of newlyweds, a young woman having some fun in the absence of her lover, a lonely, melancholic man, a lonely, melancholic woman, and of course Jeff, the happy bachelor with a loving and gorgeous girlfriend anyone would be a fool to refuse. As Jeff and Lisa embark on a journey to solve the murder mystery, Jeff will see a new and adventurous side to Lisa and helplessly witness his love and affection for her.

Part of what creates the suspense – and the humor – in the story is the fact that Jeff cannot move. His nurse, girlfriend and detective friend come and go entertaining his whimsy and curiosity. These dialogues are funny and suggestive, giving the impression of a farce.

There are many moments when we wonder if we’re watching a comedy about a desperate man who almost wants a murder to compensate for his boredom, or a thriller revealing a terrifying question about our daily lives, namely, if we were to watch our neighbors for a week who knows what we might find?

Hitchcock’s approach to creating suspense in the murder mystery / love story is very much connected to his use of music and editing. When we begin scanning the neighborhood we hear the scales of what will later be a love song. When the Thorwalds are introduced to the story, instead of the diegetic music, we hear sirens going off in the distance. By the time Lisa climbs in through the murderer’s window in the finale – a gesture that proves to Jeff her adventurous spirit, the romantic, even sexy song waltzes through the courtyard. The song, in contrast to the suspenseful music we might expect to accompany this action sequence, underscores Jeff’s emotional transformation as opposed to his external goal of solving the mystery.

There are striking visual choices to delay or quicken what we see, creating an interesting approach to suspense. In the finale, Hitchcock’s weapon of choice for Jeff is the flashing light bulbs of his camera, which delays Thorwald’s approach. The pace of the editing then quickens when Thorwald finally attacks Jeff. These aesthetic choices not only mark Hitchcock’s ‘pure cinema’ method of primarily relying on images, editing and sound to create suspense and drama, but also, by invading the peeping tom’s lair, reflect the idea of the sinister face of life seeping into and shattering the formerly innocent and banal act of voyeurism.

In the end, aligned with the symmetrical resolution of all the characters’ stories –like, the newlyweds turning into a bickering old couple, the older couple getting a new dog, the girl reuniting with her lover and the lonely man and woman coupling up– Jeff appears with both legs in a cast, a victorious Lisa by his side in a surprisingly modest outfit. The suspense story once again returns to its farcical origins by coming full circle to the idea of marriage. In Hitchcock’s world there seems to be nothing better than an old-fashioned murder mystery to bring lovers together and seal their fate in a happily ever after. The suspenseful mystery ends on a funny note, as if to say humor is always right alongside murder and tragedy.

— This article was originally published in Brattle Theatre Film Notes on September 19, 2016