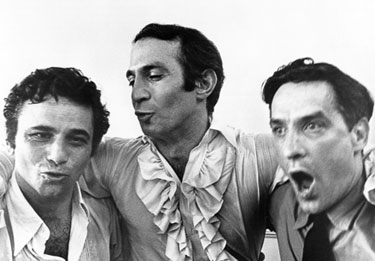 One of the most accomplished auteurs of American cinema, John Cassavetes makes a subtle, honest and deeply sincere film about being a man in western society. In Husbands, his three suburban New Yorker husbands represent the traditional male status quo, that of the married man with children, a dull job, a house, a car, a garage, a debt, a receding hairline, and a few buddies who faithfully remind them they are still who they always were, namely, hopeful young boys.

Husbands is about what it’s like to have had a vision of himself as a young man and what it’s like to have lost it without having stopped once to notice it slipping by. Gus (John Cassavetes), Harry (Ben Gazzara) and Archie (Peter Falk) mourn the death of a close friend, whose sudden passing reduces them from a happily deluded quartet to a saddened and confused trio. Except, they don’t know how to mourn. Instead, they suddenly transition from middle-aged, middle class, professional family men to your average obnoxious, vagabond teenagers.

Stylistically radical, Husbands invites the audience to take an audaciously long and personal look at living the male bravado and the ultimate delusion of manhood – that man is free and immortal. The first half of the film is spent showing the three husbands drink, race each other, play ball, physically and verbally attack each other and their companions, display a scattered sense of self and life, and basically use up a day and a night in the pursuit of their lost youth and freedom. Only in the second half, prompted by Harry’s last of many fights with his wife, they all decide to go to London to take their depressed feelings to the next escapist level.

When you watch Husbands from a modern audience perspective, first thing to notice is its shocking freedom in exploring its subject matter. There seems to be no constraint on screen time, no stylistic limits on camerawork, lighting or acting, and seemingly almost no intention to make the movie fit in one category or other. It is simply and freely what it is. If this were a modern movie, the trio would be going to London by minute 25 of the picture, whereas Cassavetes shows us a phenomenal hour and 15 minutes of three guys mucking around, philosophizing in fragments, and getting nowhere… Husbands reminds us this is what movies could be, or perhaps should be, all about: life itself.

As the invisible onlookers and eavesdroppers, we get to experience life from the perspective of three husbands living out a bittersweet period of their lives in real time. The improvisational, fly-on-the-wall style of the film makes the occasional fleeting moments of subtle wisdom all the more poignant. We feel that we catch glimpses of raw truth about the male reality. Archie says at one point: “What do you prefer to do, if you had a preference?” Another time we hear from Harry, simply: “I’m confused,” and “There were four of us, now there are three of us, and you wanna be alone?” They utter uncensored expressions of contained passion, discontentment and frustration: “The legs, the breasts, the mouth”, “We have two lovely wives, the only problem is to go home and make love to them”, “Gotta be an individual.” In these lines, drama and deep emotions seep through between the lines without an ounce of sentimentality.

The most exquisite thing about Husbands is its finale. The men’s infantile romp is over, and they have not grown any wiser. Archie and Gus leave Harry, the more confused of the three, behind in London. On the sidewalk, they divide the toys they bought for their kids. It’s a solemn moment that screams with disappointment and perhaps relief from the unknowns of their great adventure in London. As they walk to their homes, Archie turns to Gus and repeats twice: “What is he going to do without us?” Never mind the childishness of assuming one grown man can’t do without the other two, the real meaning of this desperate remark is even more dramatic. It feels like Archie really means to say: “What are we going to do without each other? What are we going to do without us?” Just like they demand of the woman in the drawn-out singing contest early in the film, they are in search of ‘warmth, heart and soul’ and there is nothing else they can do to satiate their deep need to return to the basics but cling to each other.

The husbands in Husbands, just like most of us, are perpetually dissatisfied with and doubtful about life. By finale, we are not any wiser either, but we have faced our own delusion of freedom and immortality. Cassavetes’s portrayal of fragility of being a man in western society has captured the raw and painful side of a delusion we all share.

— This article was originally published in Brattle Theatre Film Notes on August 11, 2016