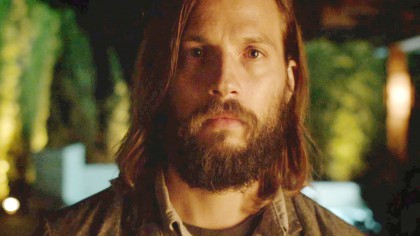 Karyn Kusama’s mystery/suspense drama The Invitation opened last week to great reviews. I had the opportunity to see it in its opening night and found its approach to storytelling and specifically its style of acting, rhythm and tone refreshing.

In Phil Hay and Matt Manfredi’s screenplay, the hero’s perfectly implausible suspicions about a dinner party slowly turn out to be worse than anything he could have imagined. The film is neither glossy in its approach to revealing thrills, nor solely concerned with art-house aesthetics. It’s unusually naturalistic in its portrayal of an awkward gathering and the unexpected events that follow.

Considering Kusama’s distinctly non-Hollywood way of handling her material, I thought it might be interesting to take a deeper look at the script’s story structure and explore how it fits with the universal language of storytelling. I used Blake Snyder’s much celebrated Beat Sheet method to dig out the story points of The Invitation. Check out Snyder’s Save the Cat! for more information about his screenwriting methodology.

Please be sure to read on AFTER you watch the film, which is unfortunately on limited release. Enjoy!

Opening Image
Our hero Will (Logan Marshall-Green) and his girlfriend Kira (Emayatzy Corinealdi) are on their way to a dinner party. The invitation is from Will’s ex-wife Eden (Tammy Blanchard) and her new partner David (Michiel Huisman). It’s established that the event will be a hard one for Will to stomach and he’s already questioning the motives behind throwing such a party.

Catalyst
The invitation for the party itself is the catalyst for the story, and in this case, thanks to its no-nonsense title, it hits the audience before they even see the opening.

Theme Stated
Will and Kira accidentally hit a coyote on the way to the house. Will takes pity on the whimpering coyote and clubs the animal to death to put him out of his misery. Will’s decision to choose death over suffering for the coyote will be a running theme throughout the picture: is death more desirable than a life in pain?

Set-up
It quickly becomes clear that Will not only has to face Eden after two years of losing contact with her, but also he’ll be returning to the same home where they lived as husband and wife along with their son, Ty, who accidentally died in that same house.

When Will and Kira enter the house, the psycho-emotional dynamics of the dinner party begin to unravel. Will sees the first image of his son upon entry to the house – a boy playing with his toys alone in a room. Will and Eden are clearly moved to see each other again, whereas there is clear tension, if not subtle hostility, between Will and David. We get to know their close group of friends who also fell apart after Ty’s tragic death. With every passing minute, Will’s unprocessed grief over his son and his struggle to accept ‘time heals all wounds’ seem to float to the surface with growing urgency.

Debate
From the very moment Will enters the house, he, and us too, have an eerie feeling that something is not right about the house and its occupants. He soon notices that the windows are all blocked and the house seems cold and sterile in spite of its warm colors and lighting. Despite appearances of excited and welcoming hugs, there’s something phony and forced about the whole gathering. And of course, it is the hosts who are the oddest with their overly friendly and exuberant tones. There are awkward silences and emotional holes between them all. Though they don’t seem wholly uncomfortable, they all seem on edge about something unspoken and heavy.

Eden and David’s mysterious housemate Sadie (Lindsay Burdge) and David’s perfectly unlikeable friend Pruitt (John Carroll Lynch) do nothing to ease Will’s discomfort. Will notices David locking the house and confronts him about it, managing to settle with leaving the key on the door. Upon further observing the hosts’ pushy attempts to soften the tension by offering uber-expensive vintage wine, Will knows something is seriously wrong. But what? Should he accuse Eden and David of something? But of what? What CAN be happening, let alone what IS happening?

Break Into Two
Eden and David screen a video of a group they’ve been involved with in their travels to Mexico. At first, it seems like a cheesy retreat, promising lightness and happiness amidst all the pain and suffering we all live with in our lives. Death, according to the cult leader, is simply a shedding of the burden of being in our bodies and a happy passage into something bigger and better than ourselves. A young cancer patient’s peaceful and well-supported suicide is shown at the end of the intro – death seeps into the picture. Will’s unfounded suspicions begin to find some grounding.

B Story
Along with the developments of the second act, Will begins to reconnect with his dead son as he walks around the house alone, revisiting his memories and slowly saying goodbye to him. His private moments with the memories of his son become points of the story where the theme is further discussed: would you choose death over life, simply because the pain of loss is so unbearable?

Fun & Games
Fun & Games begins with a literal game of ‘I Want’, inviting the ‘you only live once, carpe diem’ philosophy of life. The apparent aim to relieve the tension caused by the morbid suicide video fails miserably when Pruitt goes on to tell the guests how he accidentally killed his beloved wife. Eventually Claire (Marieh Delfino) feels unsettled enough to decide to leave the party. David and Eden’s efforts to make her stay alarm Will to defend Claire’s exit. As Will watches intently, Pruitt moves his car to let Claire go, but then disappears out of sight, presumably, to say something to Claire, at which point David interjects and confronts Will about his suspicions.

Will continues to explore unsettling details about the party as he spies on Eden taking pills, rejects Sadie’s offer to sleep with him and finally gets a cell phone signal to receive a voice message from the only guest who couldn’t yet make it to the party. Apparently, Choi (Karl Yune) has already been to the house and had to leave to run a quick errand. So, how come he’s still not around? Suddenly Will’s ludicrous suspicion that ‘nobody can leave this house alive’ seems significantly more warranted.

Midpoint
Will accuses Eden and David of inviting them for a brainwashing session for their weird cult project and having clearly done something to Choi. As Will demands explanations, to his great embarrassment, Choi enters unexpectedly with an excuse – a moment of false defeat that not only throws Will’s balance and confidence, but also puts him in the position of the wounded guy who can’t handle his grief and doubt.

Bad Guys Close in
Will has now lost the little credibility that he did have. Even Kira suggests they should leave to avoid further embarrassment. His attack has failed miserably and Eden and David came out looking like the sane and together people Will intuits they aren’t. Accepting his defeat and almost beginning to doubt his own sanity, Will asks to visit Ty’s old bedroom before he presumably leaves the house with some dignity. Will and Ty share a smile in Ty’s bed – a heart-breaking father and son moment.

Will then explores the room that’s been turned into a study and finds the cult leader’s video in Eden and David’s laptop. His suspicions that something is seriously off are renewed but his confusion is at its height. Through the window, Will watches David light a red lantern in the garden.

When Will returns to the table, his friends are celebrating a birthday with a cake and pink-colored liquor brought in especially for dessert. Just as everyone raises their drinks, Will knocks off everyone’s glasses, claiming that they’re all about to be poisoned. Sadie pounces on Will, accusing him of ruining everything. Will pushes her off, which causes Sadie to knock her head and collapse, echoing Pruitt’s story about killing his wife. Sadie still has pulse, but Will is thought to have gone way too far, when…

All is Lost
Gina (Michelle Krusiec), who apparently was the only one who took a sip of the drink, is discovered to be foaming at the mouth, unconscious. To everyone’s horror, Will turns out to be right: they were all meant to be dead by now.

Break into Three
People scatter in horror to no avail; Pruitt quickly shoots a couple of the guests. Will and Kira manage to momentarily hide, as they acknowledge their fate: they’re locked in the house with a death sentence and the only way out is either a miraculous escape plan or to kill off the cult members. They overhear David trying to convince a distraught Eden to keep going with their plan to kill everyone – it is the only way they’ll be freed from their pain.

As they scramble to find a way out, Pruitt confronts Will and Kira, and Kira manages to kill Pruitt. Eden shoots Will on the shoulder and then shoots herself in the stomach to put an end to her own insanity.

Finale
Finally the villains are dead and Eden is drifting away. She asks to be taken out to the garden where their son died and takes her last breath. Eden’s death feels like a choice to let go of the burden of life, whereas Will holds onto life, when he is the one still openly hurting from their loss.

Will stands up from Eden’s lifeless body to notice there are a many number of houses with red lanterns in their backyards. Sounds of gunshots and sirens wail in the night, suggesting many others are carrying out plans of the same nature. Suicide cult has clearly resonated with many, all suffering from their own version of grief and pain.

Final Image
Will and Kira hold hands at the sight of a horror that swarms LA. No matter how unbearable life may continue to be, they are united in the goal of living over succumbing to death.