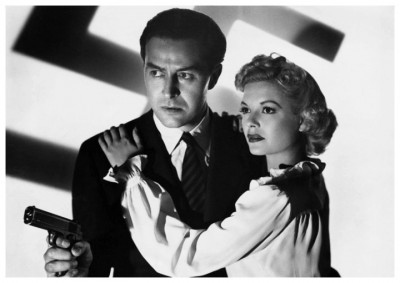 When Ministry of Fear’s hero Stephen Neale (Ray Milland) steps out of the mental asylum in the middle of the night to confront his new life, we already have a sense that things are not going to look all that bright for him. As he promises his doctor that he’ll stay out of trouble and live a quiet life, we’re already dreading what awaits. We owe this feeling to director Fritz Lang’s eerie setting, lighting and pacing. As expected, Lang does not waste any time before he turns his hero’s life upside down.

Lang’s cinema always asks us to question what’s expected and prevalent. Only few answers are provided as more and more questions pile on, taking us –and the hero– farther and farther away from innocence. Stephen’s inevitable nightmarish life outside is set up in the most innocent way possible. Upon winning a cake at a contest in a lively fair, he finds that his little welcoming gift into his life as a free man may just be the thing that will hold him captive. A festive and delicious cake turns out to be delivering a secret message to the Nazis in World War II England and Stephen happens to be the lawful man who is in the way. He is yet to experience mystifying deaths, disappearances, accusations, secret hidings and deliveries gone wrong. The more Stephen searches for answers the deeper he goes into the depths of a labyrinth of crime.

As it is common in Lang’s cinema and in contrast to the spy thrillers of the era, Ministry of Fear presents a world of characters where the heroes and the villains are not clearly defined. Even the Scotland Yard inspector is aesthetically portrayed as a Nazi agent until we get to see his real identity. In Ministry of Fear, everyone is suspect until proven innocent, and even then we are led to ask, ‘Can we really be sure?’

The reasons for Stephen’s asylum stay reveal a dark side to his past, but this new information quickly morphs into functioning as a way to establish him as wronged and victimized rather than guilty. Contradicting his questionable past, Stephen’s soft and giddy demeanor adds yet another unusual dimension to the movie. The common themes of paranoia, uncertainty and fear of the unknown are contrasted with a concerned but determined hero, who’s peculiarly not so much scared as intrigued.

Stephen’s eagerness and joy to begin his new life at the start of the movie sets him up as a hero who’s determined to enjoy life no matter what. And even in the face of clear threats to his life and freedom, he seems to cling to the task at hand and keep following the thread of events with sincerity and good intentions. The one weak point of the story is Stephen’s lack of understandable motivation to pursue the mystery of the cake and keep getting sucked into the dark affairs of the Nazi spy ring, but his indomitable curiosity and enthusiasm keep us on board with him.

As Stephen’s innocence slowly becomes contaminated, a love story flourishes between him and Carla (Marjorie Reynolds), the Austrian refugee who runs the organization that delivered the cake to Stephen by mistake. Carla also gets her fair share of scrutiny as Stephen suspects that her organization may be a front for the Nazis. Stephen’s good-natured belief in Carla and Carla’s immediate trust in Stephen paint this idyllic picture in the midst of turmoil and uncertainty. Carla will end up committing the toughest social transgression and her action will link the two characters in a complex bond of guilt and innocence.

Ministry of Fear has an air of romance and melodrama despite the mounting plot of action and relentless suspicion. The dominant mood of paranoia is mostly delivered via the atmosphere, set designs and lighting as opposed to acting and dialogues. The expressionistic high-contrast lighting, the way characters are framed in the sets and the choice of objects that appear in complex compositions all work to prepare the audience for a mood that is called for in the narrative. The creepy atmosphere is accompanied by a touch of Hollywood glamour, especially in the style of acting, light-hearted romance scenes and particularly the finale.

Ministry of Fear is an especially important piece of cinema because of its stylish atmosphere, interesting direction of acting and captivating narrative. Made in 1944 among many other Nazi propaganda movies, spy thrillers and numerous examples of Film Noir, it captures Fritz Lang’s unique approach to the genre and distinctive cinematic style.

— This article was originally published in Brattle Theatre Film Notes on March 8, 2016