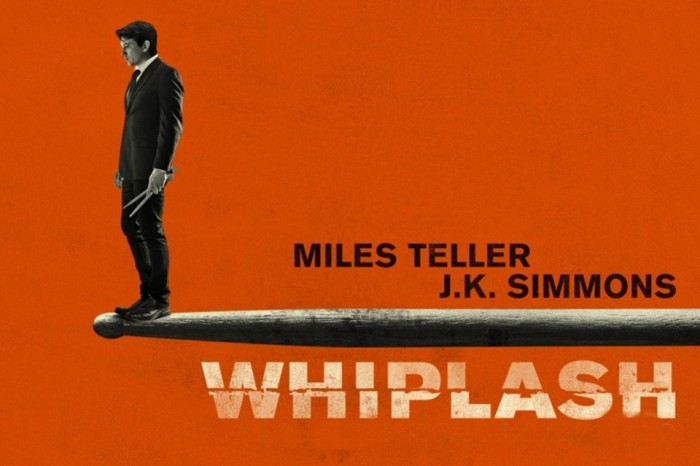 I received great response to my deconstruction of ‘Birdman’s screenplay based on Blake Snyder’s beat sheet model. Here, I will tackle one of my favorite screenplays of last year: ‘Whiplash’ written by Damien Chazelle. Caution: Please read on only if you already watched the movie.

Opening Image
Andrew (Miles Teller), our teenage hero, is practicing alone at night at the top music school of America. Enters the antagonist, Fletcher (J.K. Simmons), who is the ultimate decision-maker of who gets to be a great jazz musician – a goal which is clearly and painfully central to our hero’s life. From the first scene, we know who our hero is, what his goal is, what he must do to get it (climb mount Fletcher) and, judging by Fletcher’s damning exit at the end of the scene -a perfect ‘Kill the Cat’ moment- we know that a very tough ride awaits him. Such a simple, economical, powerful opening…

Theme Stated
Following Andrew’s first of many discouraging encounters with Fletcher, he goes to the cinema with his dad, Jim (Paul Reiser). Jim represents the opposite of where Andrew wants to see himself when he is at his dad’s age. When Jim hears about Andrew’s disheartening experience with Fletcher, he talks about how his dream of becoming a writer diminished over the years. “There are other options,” he says. To Andrew, naturally, there is no other option but to become the greatest jazz drummer in history. Andrew’s response to Jim’s “At my age you get perspective,” is the thematic premise of the movie: “I don’t want perspective.” The argument is posed: Will Andrew learn to get a perspective like his dad, or will he prove that he really doesn’t need a ‘perspective’. This argument suggests that we are about to explore the possibilities of a young man achieving what his father failed to achieve, (namely, greatness!) – a theme that is universal and timeless.

Set up
First 10 minutes establish the hero, the antagonist, the dad (who carries a Vogler-esque antagonistic energy considering Andrew’s internal struggle), the love interest (Melissa Benoist), the setting (the conservatory, the dormitory), Andrew’s position among his peers at the rehearsals, the depth and rigidity of his self-practice and how far he is from measuring up to the greats.

Catalyst
Fletcher turns up at one of Andrew’s band rehearsals and unexpectedly selects Andrew to join his band. This is no doubt a life-changing event, but it is not disguised as bad news. It is bad news, disguised as great news that is incredibly hard to transform into truly great news. Andrew’s willing entrance into the chambers of Evil is all the more powerful for it.

Debate
“What do you want to do with your life?” bluntly asks Andrew on a first date. He is driven and believes every choice is made for a reason. Andrew’s determination to achieve his goal is clear and the threats against his achievement are quick to follow. Before Andrew’s first rehearsal with Fletcher’s band, Fletcher takes on the role of a father to Andrew – a total opposite of his real dad. “You’re here for a reason,” he asserts. This fatherly demeanor almost immediately dissolves into I-will-break-a-chair-on-your-head attitude. The debate over deciding between transferring to another school to become a regular person like his dad and staying on and risking his life in the hands of monster-Fletcher for the chance of being the next Charlie Parker is at its most intense. Does he kill himself practicing or does he follow his dad’s ‘take it easy’ advice?

Break into Two
First rehearsal with Fletcher’s band is Andrew’s introduction into the world of Act II and it’s not pretty! After the disaster of the first rehearsal Andrew emerges as a man who is now fully aware of what he’s getting himself into. His commitment to being one of the greats is now stronger than ever. He is ready to risk his life for his goal.

B Story
Andrew’s flirtation with Nicole is lacking in screen time and only partly carries the theme of the movie. It is merely one of the obstacles that Andrew removes from his life to clear his path. Andrew’s relationship with his dad has more of a B Story value, as it is a point of contact that intensifies the question raised in the theme. However, the real relationship that qualifies as B Story, I believe, is Andrew’s ‘love story’ with Fletcher. From the first rehearsal theirs is a love and hate relationship. Andrew ‘knows’ Fletcher will be his key to success and will endure anything to learn from him. Fletcher also ‘knows’ that Andrew is his key to discovering the next Charlie Parker and will stop at nothing to squeeze it out of him. These are two souls who desperately need each other for their respective goals.

Fun and Games
Andrew practices really hard! The tension builds as the band rehearses for a competition. Andrew has to do all he can to make it as a core member of the band. We watch him put all he’s got into his goal and feel that his triumph is inevitable.

Midpoint
Andrew misplaces the core drummer’s charts and unintentionally wins the position of the core drummer at the competition. A mysterious lucky break for Andrew but he nails his core position in the band thanks to his hard work. Nevertheless it is a false victory as the tables are quick to turn.

Bad Guys Close in
My favorite part of the screenplay, where every single scene relentlessly tightens its grip on Andrew. A succession of deliciously tense scenes send Andrew spiraling down into an abyss of loss of control and physical, emotional and psychological torment.

The scene of Andrew’s visit with his dad’s family shows that none of his efforts are appreciated by the people who are closest to him. His great achievement of making it in the core band means nothing to his family – he is still a disappointment. But Andrew knows he is better than all of them and his intention to prove them wrong adds to his commitment to his goal.

Andrew’s first step into taking control of his life and bettering his chances of success is to shed Nicole, whom he considers in the ‘loser’ category. Nicole is not even allowed to be a bad guy in his life. Andrew fights back by alienating himself further and moving more and more into the dark side.

Just as he thinks he finally has a firm place in the band, he is pretty much immediately replaced by musically inferior Connolly. Andrew gets increasingly enraged and obsessive. “Get that part back” rings in his ears.

Fletcher’s grief over his old student’s death further darkens the mood and intensifies the value of achieving greatness in Fletcher’s guidance. Who wouldn’t die to be considered ‘a beautiful player’ by him!

Andrew finally earns back the part by outplaying his competition after a 5-hour drumming marathon, but he is physically, emotionally and psychologically traumatized. Is it worth it, we ask. But Andrew is swept away by a deadly tide.

All is Lost
The scene where Andrew frantically tries to get to the concert that will give him the one and only chance of making it in the Lincoln Centre. He is still threatened to lose all that he literally shed blood, sweat and tears for. After he puts his life at risk to play at that critical concert, Fletcher’s words echo in his head: “You’re done.” Injured, in tremendous pain, enraged, turned into a monster worse than Fletcher-the-Devil himself, he has nothing more to lose. When the last words are spoken, his dreams are shattered beyond any hope of repair.

Dark Night of the Soul
Andrew is expelled, not just from school but from his life as he knew it. His drum kit as well as his entire history fit in a few boxes. He is even approached by a lawyer, who wants to use him against Fletcher as he has nothing more to gain from him. He is tired, sad and resigned. All he feels is betrayed by his dad, who dreadfully misses the point of Andrew’s life and passion. The distance between them is unbridgeable. There isn’t a soul in the world who understands Andrew now.

Break into Three
Except for Fletcher himself! A and B Stories cross, as two men who have lost the core of what makes them who they are finally have a heart-to-heart. Fletcher’s philosophy in all its glory once again rings so true to Andrew: “Charlie Parker would never be discouraged.” In a way Andrew is the only student who ever really understood Fletcher. Ironically Fletcher, who buried Andrew in the deepest darkest hole is also the only one who can bring him back to light.

Finale
The final showdown between Jake La Motta and Sugar Ray Robinson! Andrew takes a tentative step onto stage again with Fletcher’s new band. A total make or break moment in Andrew’s career. Fletcher names the game and throws Andrew the hardest blow of his life right at the start of the match. Andrew is knocked out within a few minutes into the concert and is ready to throw the towel. At backstage Jim is there to catch him when he falls. Andrew’s despair suddenly transforms into a Eureka moment, fuelled by his final realization that he must grow up and break out of his father’s loving grip. He is either to take a huge risk and make a life for himself following his true passion, or go back to a dull, cushioned life with daddy. When the stage hand asks Andrew whether he knows Jim, Andrew answers, much to his dad’s dismay, “No,” and returns to the stage. And to face his true love – Fletcher.