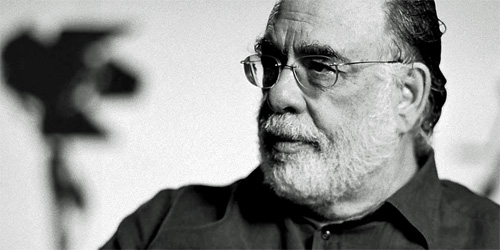 Sometimes as screenwriters we get lost in the last project we are working on, or all the overwhelming information and advice that’s floating on the web. A few words from Francis Ford Coppola remind us how personal the writing journey is.

Coppola “A movie is like answering a question.”
MoS –As simple as that!

On recovering from the initial failure of ‘Apocalypse Now’:
Coppola “I decided I would make a movie that would be very commercial. Every time I’ve tried to do something commercial it’s always failed… So ironically, the thing I did to solve the problem ended up causing a problem.”
MoS –When you bury yourself under screenwriting books, magazines and blogs, you can lose touch with what you are really meant to be doing, aka ‘writing from the heart’, which will ultimately create the movie that captivates audiences.

Coppola “…in those days, the young men in film were all about camera, films, and editing, and that’s the least important thing. Orson Welles said once that you could learn those aspects of film in a weekend. The hard parts of film are acting and writing… You never hear of a movie that’s so wonderful because of the photography or the art direction being great. It’s usually the acting or writing; without those two things you don’t have anything.”
MoS –This great reminder for writer-directors inspired me to do a quick exercise. I thought of the first movies that taught me how crucial writing is and how spellbinding acting can be. They happened to be two movies starring Meryl Streep, whom I adore. When I watched ‘The Bridges of Madison County’ I was blown away by all the long scenes of two characters talking in a little kitchen. I couldn’t get enough of their sweetly tension-filled dialogue. There were no effects, fast paced cuts, nothing noteworthy about cinematography, but I could watch that couple in that kitchen forever! All thanks to Richard LaGravenese’s beautiful screenplay.

The movie that popped in my mind for acting was Meryl Streep’s performance in the opening scene of Mike Nichols’s ‘Silkwood’. Streep’s character drives her boyfriend (Kurt Russell) and flatmate (Cher) to the factory where they work. When they get stopped at the gate, Russell leans over the driver’s seat to hand something to the guard. As Russell is leaning over Streep, Streep habitually sniffs Russell. It’s a momentary thing, as it should be; probably not a directorial decision, may be not even an acting decision. But that moment of intuitive acting unintentionally helps form a clear picture of what this couple is like together. Beautiful example of how acting can capture in an instant what writing or directing cannot.

Coppola “In terms of money, I have a magic box. I do. In that box is an infinite amount of money. So when I have a worthy project I just go in that box and I take out the money. The box doesn’t exist and therefore there’s nothing in it. But I believe there is. And ultimately that’s what happens.

At the time, if I ever have a script doing what I wish that it could do, then I would figure out where to get the money.”
MoS –Never underestimate the power of manifestation. Use your imagination, and not just in the writing process.

Coppola “Sometimes when I write screenplays I first write them in prose so I can enter into the characters’ thoughts. I guess in the old days that was like a treatment. I write it as if it were a novel, then adapt into a screenplay. It’s how I find out about the piece and the themes.”
MoS –I get criticized for doing this, because even the finished screenplay ends up a little novel-like. But I believe in delivering all the feeling I can in description so the screenplay plays as a movie in the reader’s mind first.

Coppola “I remember showing ‘The Godfather’ to all the film cognoscenti of San Francisco, and they all came out after the film and only one person said that it was something good: Bob Towne, the screenwriter. He wrote ‘Chinatown’. He was the only one who thought it was good. So all these people who buzz around the film business know nothing. No one does.”
MoS –Since no one really knows you might as well go with your gut-feeling. But make that gut-feeling as well-informed as you can.

In response to the question, “Do you ever get critical of your work when still writing it?”
Coppola “Oh, I’m very critical of it, but I have a rule. When you write six pages, you turn it over and don’t read it until you’ve written the whole thing. A young person, any person really, has a hormone injected into their blood stream that makes them hate what they’ve just written. It gets better a few months later when you read it. Do it, write it, and turn the pages over and feel good about it. Then the next day pick up from where you left off. A lot of times when you’re writing you can get lost in making revisions to things that later you’re just going to cut out later. If you decide halfway through the character isn’t a man but a woman, then just change it later. But don’t go back. Go forward because you have no idea where it’s going to go. Let it tell you what it’s going to be.”
MoS –This is in the same vein as Viki King’s model of screenwriting. If you haven’t already done so, I highly recommend you read ‘How to Write a Movie in 21 Days’.

In response to the question, “Do you think risk is involved with your artistic growth?”
Coppola “Yes, without risk I don’t think there can be art.”

In response to the question, “What’s the best advice you can give another artist?”
Coppola “Suspend your self-doubt, do only the work you love, and make it personal.”

– Extracts from ‘The Rumpus Interview with Francis Ford Coppola’ by Anisse Gross. August 17, 2012. View the full article at The Rumpus.