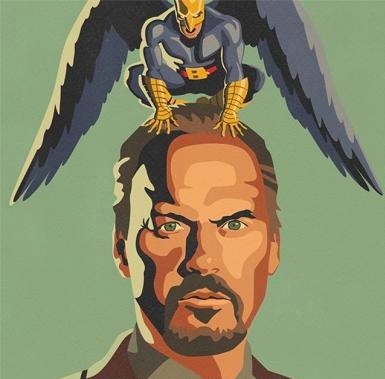 I’ve been wanting to apply the Snyder Beat Sheet to a movie for some time. ‘Birdman’ is a great one for the task, and a challenging one too. Let me know your thoughts at selin@magicofstory.com
Caution: Please continue to read if you’ve already seen the movie!

Opening Image
Hero in meditation. His voice-over says, ‘How did we end up here? … We don’t belong in this shithole.’ Perfect opening for a character who will soon begin questioning his self-worth, the meaning of his existence and above all the reality of all that is. As he is levitated during meditation, we are led to think Riggan Thomson (Michael Keaton) may be talking about the notion that all that we see, feel and think are perceptions of a grand illusion (maya), and in fact ‘this’ is not our true nature – we do not belong ‘here’ in the world of maya.

Theme Stated
Riggan is haunted by the superhero character that he played many years ago: Birdman. Birdman, the alter ego, tells Riggan that he will fail at his comeback in the theatre. He should give it up already and embrace his superhero persona instead. Riggan, either in reality or in his personal reality, does have supernatural abilities. We are left to doubt until the very end whether he is an extraordinary person doubting his extraordinariness, or a perfectly ordinary person doubting his ordinariness. Is he a potential winner or a loser?

Set-up
Riggan at a rehearsal for his comeback play. We observe him publicly exercise his superpowers, about which we remain doubtful. We meet his alter-ego, producer, daughter, fellow actors, lover, ex-wife. We get the sense that things are going badly for this guy. When all he wants is to prove that he is something, he grows more and more fearful of firmly establishing himself as a nothing. He is desperate for acknowledgment and success, but also strangely aware that ‘this’ is not ‘it’.

Catalyst
The catalyst is an amalgam of Riggan’s external and internal conflicts. On the one hand there is the question of whether he will really take on this crazy challenge of making it in the theatre and whether the incredible risk he is taking will pay off. On the other, his internal conflict is with his own ego. Will he be able to overcome it, silence it, stop battling with it? He also has a hyper-conflict: Are his superpowers real? Is he and everybody and everything else real? All of this is set up from the first instant we see and hear Riggan. His catalyst lies within himself. But if I had to pick a scene that is cataclysmic for his journey, I would pick the scene where he supernaturally ‘kills’ his co-star and takes charge of his destiny by changing it for the better against all odds.

Debate
The hiring of Mike (Edward Norton) and the previews that follow. The one-on-one rehearsal with Mike reveals Riggan’s weakness and self-doubt. In the first preview Mike messes up the whole show by insulting Riggan and the audience in the middle of the run. Riggan has to decide whether he should keep Mike, who will clearly be instrumental to his success, despite the risk of damaging his ego along the way. Right after the preview, Riggan and Mike have a conversation where we get to know who they are and what they are in this for. The stakes are high for Riggan: this play is a make-or-break for his career and seemingly for his entire existence.

Break into Two
This is a tough one, because almost the entire film seems to be a debate about all the explicit and implicit questions raised at Fade in. A prominent Break, if not the Act I Break, is the scene where Riggan’s daughter, Sam (Emma Stone), pummels Riggan’s ego by telling him he is unimportant and he better get used to it. Riggan is clearly devastated. But after she leaves, despite his apparent ‘loser’ outlook, he uses his magic to give the ashtray a gentle spin, as if to say, ‘Yes, I know, but there is something else…’ Meaningfully, in the scene that follows, his stage character says, ‘I spend every fucking minute praying to be someone else. Someone I’m not. … I don’t exist. I’m not even here. I don’t exist. None of this matters,’ and then shoots himself. The Riggan-Sam scene tips Riggan over to the throes of an even grander battle with himself.

B Story
The only love story credit would be traditionally given to Mike and Sam’s developing romance. But I feel Riggan’s relationship with his daughter has the only B story quality. At the Act I Break scene I mentioned above, Riggan is sympathetic toward Sam for the first time, and their relationship flourishes throughout the rest of the film. Sam will also become the first to find out about Riggan’s ‘true’ identity. Theirs is the true romance of the film.

Fun and Games
All the previews up to the first time Riggan reads a review of the play.

Midpoint
Riggan receives a review where Mike comes across as the star of the play and he, ‘the aging action hero who grasps for his youth.’ Riggan experiences a false defeat. He is once again pushed to the edge to choose between his ego and his dignity (which also stems from ego – there is no way out of the ego trap!).

Bad Guys Close in
Ego wins! Mike stays on as a threat, but he is no more of a threat to Riggan than his play’s failure. Riggan continues to take more risks for his ultimate goal of making his great comeback. But the pressure builds. Mike becomes more and more of a problem on so many levels, including as a love interest to Sam. Birdman insults and dares Riggan more than ever and drives him to the edge of sanity.

All is Lost
Tabitha, the critic who will give the life-or-death verdict on Riggan’s play, makes her decision before she even sees it: ‘I’m going to kill your play.’

Dark Night of the Soul
After hearing his fate Riggan truly gives up the fight for the first time. The whole world is against him. There is no chance that he will survive this and he has not a drop of hope left. He wakes up on a bench and peels his face off a garbage bag, appearing more like a homeless drunk than a superhero. Birdman brings in the big guns to take advantage of Riggan’s weakest moment  and lure him back to his side. Riggan falls for it. But, does he fall into Birdman’s trap, or is he building up the courage to step into his power. He ends up on top of a building, seemingly about to commit suicide. When a neighbor helps Riggan step down from the edge and asks ‘Do you know where to go?’ Riggan responds, ‘Yes. I know where to go,’ and jumps off the rooftop without hesitation. Riggan soars high over Manhattan, just like Birdman.

Break into Three
Riggan is a superhero now, and he knows exactly what to do. He has the solution but we don’t yet know what it is. He plans his ‘real’ suicide at the end of his opening show. Why? Because he knows he will fail, so he might as well make the most majestic exit he can? Or, now that he discovered his superpowers, he simply knows nothing can beat him, whatever happens will only serve him? We don’t know why exactly, but we know something is up when he prepares to pull the trigger.

Finale
Third act is set in the hospital room where Riggan lies with a bandage on his face that is practically the same as the Birdman mask. He not only survived, but also gained enormous sympathy from audiences and family alike, picked up great reviews and got himself a brand new nose!

Final Image
Riggan takes flight! From the opening image of a levitating man in meditation to a closing image of a man in flight from the POV of his daughter… What did Riggan figure out: that he doesn’t belong in this shithole. And he proved it.